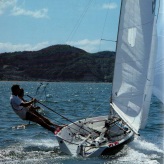 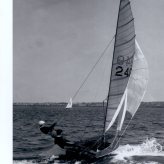 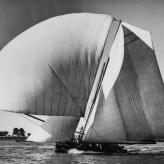 The SailCraft blog was really born years ago, when I realised that no one had tried to tell the story of the racing dinghy and the forces that shaped it.   It’s a complex tale; a web of interaction between factors such as emerging technologies, differences in geography and economies, the physics of wind and water, real estate and liquor laws, the width of an Austin A40 sedan and an English seaside laneway, and changing gender roles. It’s a tale that has spawned many myths, often ones about conservatives stifling development, but where the reality has few such villains and many heroes.*

This is an ideal time to tell this story. The arrival of on-line archives allows us to find information that has been hidden away in ancient newspapers and rare mouldering books. It’s a time when even the shyest dinghy designer can be coaxed into giving priceless nuggets of information over email. Many of the world’s top dinghy creators, including Paul Bieker, Frank and Julian Bethwaite, Ian Bruce, Rob Brown, Steve Clark, Stu Friezer, Mike Jackson, Bruce Kirby, Andrew McDougal, Phil Morrison, Andy Paterson and many more, have been happy to be interviewed for this project.

The same changes in technology have also delayed SailCraft by years. I’ve been waiting for digital publishing to develop to the stage where it can provide images of boat designs and photographs well enough to show intricate details like the hull lines of a Bieker 14, or the workmanship of an Uffa Fox classic. Such technology still isn’t here, and sadly my ability to write well still hasn’t returned, so I have turned to this blog to pass on the information that so many people have helped me to gather.  Many thanks to them and the many other people who have given their time and knowledge in the past, and my apologies for the long delay.

SailCraft comes in three parts. Part 1 is a history of the development of the racing dinghy (and the bigger boats that influenced them) from the 18th century to the present day. Part 2 is an examination of the design principles and philosophies that dinghy designers follow. Part 3 is an examination of individual classes and types and their design and development.

This blog is concentrating on Part 1 at first, starting from the 1700s, when the first racing centreboarders arrived. Part 1 is generally being posted in chronological order, but some out-of-sequence posts will be put up at times. Some sections from Parts 2 and 3 will also be posted out of order at times.

There are still many gaps in the story of the racing dinghy and its design. I would love to hear from anyone who wants to provide any information, comment or corrections.

1.1  – “The sliding keels that took advantage”: the dawn of the racing centreboarder

1.6 –  The raincoat boat bed and the shoe-shine missionary – the story of the sailing canoes, the first high performance centreboarders

1.8 – “We have written too many obituaries of its victims” – the end of the sandbagger

1.9 – “These little clippers” – from rowing boat to racing dinghy

1.10 – “All built and rigged the same” – the invention of the one design class

1.12 – “In every respect a sport suited to our sex” – the women who changed small-boat sailing

1.15 – Introducing the era of nationalism: dinghy sailing in the early 20th century

The era of nationalism explained – sort of

1.17 – Thunder, Lightning and the Tali Dogang: the classic  racing dinghy and the trapeze.

1.19 – From Kings to bouncing cats – the British development classes

1.21- “A great rage for the type” – the first Australian centreboarders

1.22- Painted boats, varnished ships and yellow dogs – the ancestor of the skiffs part 1

1.23 – The skiffs and dinghies of the east coast

1.26 – “it would be difficult to improve upon them”- the high performance dinghies of the European lakes

1.27 – The sailing scientists of the Renjollen

1.30 – Tuckups and Hikers – the vanished world of the Delaware dinghies

1.32 – “The dinghy centre of the continent”: Canada’s small boats

1.36 – A new world of dinghy sailing- the worldwide dinghy explosion (in preparation)

1.40 “A diabolically ingenious machine” – the Finn

1.41 – Technology, volunteers and the boomtime.

1.42 “This was considered revolutionary” – the Flying Dutchman and the trapeze

1.XX – “Now is the time to experiment” – the Contender and the new wave of singlehanders (under construction)

“We just wanted a nice little boat”; the story of the Laser

From fizzers to Forty Niner – the production skiff types emerge

2.2 – Shapes in the liquid: the hull of today’s performance dinghy

The real story of Amaryllis and the first racing catamarans