Let’s get one thing straight – I know I’m not a US dinghy sailor, so although I’ve done a lot of research into the history of US dinghy sailing and interviewed some of the leading minds of the modern scene, I’m not an expert on the subject. However, just as with every other region, when there’s a choice between doing what research I can or ignoring one of the main regions of the sport, it seems that the former is the best option. I have interviewed the creators of some of the most popular classes in the country (as shown here and here, and in more posts to come later) but I’d love to hear some more informed feedback from those who are more familiar with US dinghy sailing.

To try to work out what is happening in dinghy sailing in the US, rather than go on hype and impressions it seems to be a good idea to try to track the popularity of various dinghy classes.  As noted earlier, the best (albeit imperfect) source of information seems to be the fleet sizes for the national (or North American) titles, as shown in the table below. For the years 2007-2012 my information is based on those compiled by “Roger Jolly”, a poster on Sailing Anarchy. Roger’s work was great but he was only interested in adult’s classes, and he only counted the “main event” – that is, the open national titles rather than the separate events that many classes run for Junior, Youth, Masters and Women. I prefer to count these “alternative” fleets, because it gets closer to measuring the true number of active boats. It’s also a pain, because it means more digging and often means going through every results sheet to make sure the same sailors aren’t being counted twice. There’s a bunch of notes at the bottom of the table to give more information about the “alternative” fleets and other details.

The “alternative” fleets have a significant impact on the US national title attendance numbers, because American sailors don’t seem to follow the pattern of having the kids sail kids boats and the adults sailing adult’s boats as much as the rest of the world. Of course there are specialised classes for juniors and youth, like the 420 and Opti – but in the USA you also get significant fleets of kids sailing adult-sized boats, like the 50 or so who do the Junior nationals in the 16 foot X-Boat, a heavy hard-chine dinghy from the lakes of the Midwest, the 40 or so who sail the 12 foot Butterfly scow in the same area, or those who sail the separate junior nationals offered by Snipes and similar classes.  There’s also a number of adults who sail little prams designed for kids, like the Sabot and El Toro, which is a rather endearing feature of US sailing that runs counter to the general preference for big boats.

So what do the numbers show? For a start, looking at the classes where we have sufficient data, the average attendance over the last three years shows a decline of almost 10% in attendance over the past three years, compared to the period 2007-2012 (see the right-hand column for the comparative percentage). Not good. In fact the state of the sport in the US may be even worse than these numbers indicate, when one takes a longer view and sees the number of classes, once strong, that are now long gone. Some of them give a sobering picture of how even the biggest classes can vanish.  The original Windsurfer – a class I still sail down here, and one of the other types I included for added interest – had around 300 starters in the ’80s but died in the ’90s, and unlike Europe (where the class is now very strong in Italy) sadly the attempt to restart it appears to have failed. The Laser II is another example of a class that was once very strong but is no longer active – perhaps an indication that the US market seems to suffer more than other regions from SMOD manufacturers or regional associations who decide to no longer support a class. 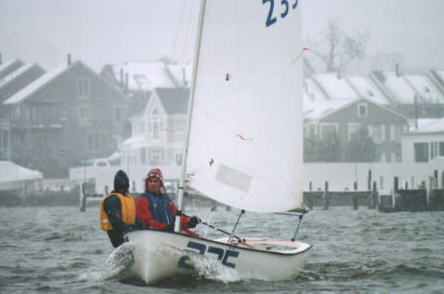 Like the World Sailing figures that were given in the last post, the US numbers show the strength and dominance of the Opti, Lasers and Club 420 compared to all other classes.  Although there’s a fair bit of doom and gloom being expressed around the internet, for these classes the picture given by the championship attendances is reasonably good taking into account issues like the economic situation and Laser’s legal problems.

The Club 420, by the way, is basically a tougher and simpler version of the International 420, with tighter one design rules. This brings up another major point about the US scene – many boats are owned by clubs rather than private owners. As people like Steve Clark (high-performance cat and canoe guru and former co-owner of the country’s biggest dinghy manufacturer) points out, this tends to encourage boats that are heavy and tough enough to handle the bashing that is often handed out by people who won’t have to fix the scars and bruises.

The second bracket of classes includes the traditional big and rather heavy hard-chine boats, like the Lightning (which includes open, junior and masters fleets that I have yet to check for double counting), X Boat, Snipe and Interlake. The strength of the Midwestern classes like the X Boat and Interlake is interesting, although any such “regional” classes are likely to have disproportionately large attendance at their nationals due to the shorter distances involved. Despite their unfashionable nature, these classes seem to be doing pretty well in terms of maintaining their fleet size. Let those who reckon they can do better prove it, before they criticise the classes that are still strong.

We have to get a long, long way down the list before we strike some high-performance dinghies, namely the 505 and 29er. The three high-performance development dinghies – the Int 14, Int Canoe and Moth – each only average 14 starters, with the Moth numbers actually dropping. Of course, no one is claiming that these numbers are a perfect illustration of the health or direction of any class, but it’s apparent that while these boats are fantastic, they are not attracting big numbers of sailors despite their age, performance and high profile.

I’ve included some sportsboats, kites, cats and windsurfers to give some idea of relative numbers. The scary thing is seeing how tiny some of the classes that have been proclaimed as the way forward really are. Hydrofoil kiting is on my own bucket list to get into, but the numbers at world level and national level demonstrate that it’s not attracting significant numbers. The high-performance windsurfer classes are all struggling, as are many of the high-performance boats. The growth of kitefoilers is less than the drop in Formula Windsurfers. For every high performance cat class like the As that is growing, there is another like the F18HT, Hobie Tiger, Hobie 20, or F20 that has dropped off or died.  Just like the Australian numbers, these figures seem to show that many pundits are aiming their criticism the wrong way – the “establishment” classes are not the problem with the sport but its saviour. The new wave and high performance development classes are fantastic (I own a couple of them) but they are showing no signs of growing popular enough to replace the older classes. 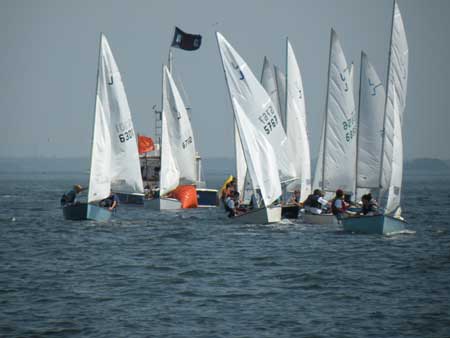 The main message from these numbers could be the vital importance of manufacturer, club and association support, and the fact that the sport’s health still depends on the classes that have been around for decades. We cannot keep on attacking these classes, as some pundits do, until we have found new types that can truly show the potential to attract the same sort of support, and that has not happened.

Perhaps a less negative end note is that looking at the USA (and  Canada, which of course has its own and very interesting scene) brings home once again the strange combination of consistency and diversity we see as we look across different regions. Obviously, most regions have the big four classes (Optimists, Lasers, Radials and 420s) and a sprinkling of Olympic classes and 29ers, but underneath them are still many of the regional classes that were born in the middle of the 20th century and reflect local culture and conditions. Even the patterns of racing and usage vary widely from country to country. It’s perhaps just another reason why when we try to shape the future of the sport, we should probably be concentrating on learning from the existing sailing scenes rather than trying to impose our own concepts of the future.

1- Includes both the adult and junior fleets added together, although they race separately.

2- Includes open and masters fleets. There doesn’t appear to be any significant number of people who do both championships.

3- Including the competitors in the open championship, the womens’ championship and the masters championship. Has NOT been checked to see if sailors who did more than one event are double counted.

4- Includes both open and junior fleets added together, although they race separately.

5- Not a national championship. The Duckboat is a Sneakbox, a traditional local type. This appears to be much more of an annual social regatta.

6- Including the competitors in the open championship, the womens’ championship and the youth championship. Has NOT been checked to see if sailors who did more than one event are double counted.

7- Includes both youth and open fleets. Sailors who did both events have only been counted once.

8- Includes both youth and open fleets added together, although they race separately. Does NOT include those who race in the separate singlehanded championship.

9- Includes open, Youth and other fleets – still to be checked.

11- This class has several championships (like the Husband and Wife title) which are listed, but my ISP has a problem with the class site so I cannot get further details.

12- I don’t know the difference between a foilboard and a foiling kiteboard. This may be related to turf wars between the two kiting bodies.

These figures use the higher of either North American or US titles. The exception is the Opti, which attracts too many people from central America and the Caribbean and therefore would not give an accurate figure of US interest. Before anyone complains, I know that North American titles include Canadian entries and Canada has its own sailing scene, but I don’t have the time to run separate numbers for Canada. Sorry.

Not every year’s data or every class can be found. I’ve still got to put in Finns and Tasars, for example.

To make it clear, no one’s claiming that numbers like this are perfect – just that they are one hell of a lot better than just going off the hype or gut feeling. If anything, I think that they make the smaller classes look comparatively more popular, relative to the bigger classes, than they really are. But given the issues involved in other measurements (for example, policies regarding membership of a class association varies so much between classes that counting members is completely unreliable) it’s the best we can get at the moment.

The Hobie 20 (said to be a copy of the Hurricane 5.9 and a “street legal Tornado”) was averaging about 60 boats in the late ’90s; now it’s down to about a quarter of that.

A former sailing journalist and magazine editor, I was lucky enough to grow up in Sydney, one of the world's sailing hotspots and to win national and state championships in classes like J/24s, Windsurfer One Designs, offshore racers, Laser Radial open, Windsurfer OD Masters, Raceboard Masters and Laser Radial Masters, to get into the placings in a few other classes, and do a few Sydney to Hobarts. View all posts by cthom249